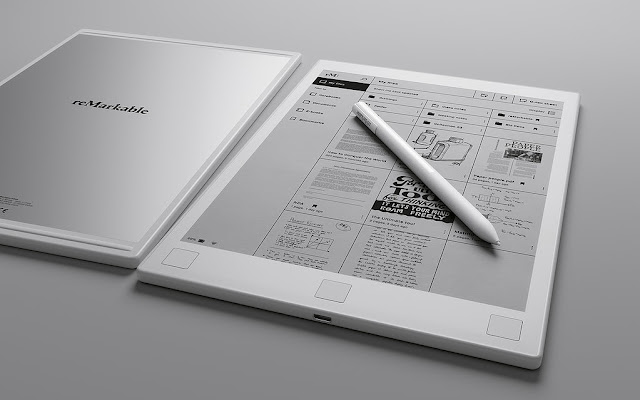 I love paper and pens. You all know this of course, because I have a dedicated blog to it and have had a few failed business ventures within the category. Paper and a good writing utensil are hallmarks of creativity. Our ancestors in remote antiquity, putting their hands on the wall of a cave and then blowing a pigment over their hand to create a sign, shows us that we have a longing to record, to create-- to say that, "We were here."

Much like the experience with finding the right bag to hold your daily carry, I've gone the rounds attempting to find the right way to take notes, to make lists-- to write freely. In my early years, I didn't write much at all. In fact I didn't start journaling until I was about 27, shortly after my first son was born.

I bought a journal with daily prompts. It didn't take long to understand that this was limiting. I like procedure and structure in most things, not notes. And so when a journal has areas that prompts, that engage me to write down what I ate, and what the best part of the day was...there was a possibility that what I wanted to write about wasn't able to fit. I couldn't ruin the book by breaking the code it was asking me to stay within, could I? Of course not. So I moved on to Moleskines. I would keep it in my bag, along with a favorite pen or pencil and pull it out to write down lists, notes and journal entries.

If you paid attention to the above paragraph, I crave order. So imagine this--lists on one page, a journal entry on another and somewhere in between, notes on a meeting. This, while convenient for writing, was utterly a waste when it came to trying to find something I was working on within the notebook. So naturally, I went to my friends at The Craftsan's Mark for a leather wrap that would hold several Moleskine sized journals. I kept one for master piece ideas, one for quick lists and one for notes. This system is just about perfect.

It didn't take long for me to begin taking meeting minute notes (I'm the secretary of a local fraternity) within these books. Once a meeting was over, I'd have to later transcribe them and email them out to the group. This wasn't conducive. One day I realized I needed a travel sized computer. So I went out and got a 12" iPad Pro. You'll recall the difficulty I had fitting it into my carry bag. I loved the iPad Pro for it's ability to use an Apple Pencil and to take notes on a virtual pad of paper. I could export an agenda from Google docs right into the device and take notes right there. Perfect.

You know what bothered me though? The 12" size, which was nearly too damn big to fit anywhere and also, while it is a design masterpiece, the iPad Pro 12" and Apple Pencil have a flaw hat only a true secretary will huff at. It feels like you're drawing on glass.....because you are drawing on glass.

Ask an artist how much the tactile feel of the instrument on the surface medium matters to them. It's huge.


"As an experienced craftsman, the tools I use become an extension of my body. As some say, I become one with my instruments. There is a tactile response from using traditional tools that is virtually impossible to achieve with their digital counterparts.

When I press a brush against my canvas, every texture, every smell, and every subtle vibration adds to the  flow of my creativity. Call me a romantic or traditionalist, but nothing comes close to  mastering a traditional tool and having it become a part of you."

One day, I thought, "Man, I think I want to get a Microsoft Surface Pro." It was smaller. It handled files more in the way a true computer would (Save to Files on iPad V. Saving like normal on a PC), and I could use it as a tablet to write on. I was almost there. Then, I was fortunate enough to come into possession of a new Dell XPS 13" laptop with touch screen. This solved the portable computer problem 100%. I love the machine to no end. 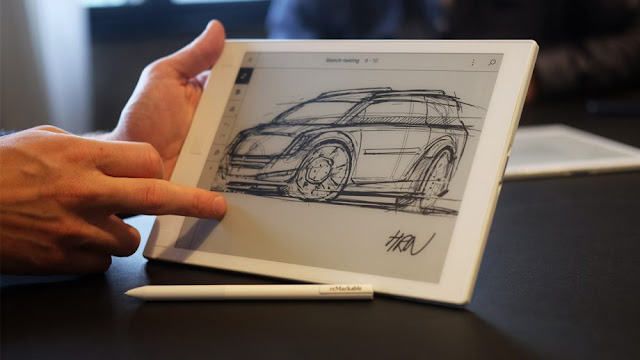 It still left me with the issue on note taking. Was there something that took notes, digitally, could OCR them, felt like paper, had sensitivity, was small and had the ability to organize notebooks etc? Short answer - yes.

I found something called the reMarkable tablet. It was precisely what I needed. I waited about a month after using it to write this article. I wanted to make sure I had experienced it fully before advocating or trashing it. What is it? Well here is where I give you a choice. Watch the video below (Original Kickstarter video) or take my word for it in this little TL;DW (scroll past the video).


A small e-in tablet. Light weight. Takes notes with a variety of pencil, pen and highlighter modes. Unlimited notebooks, organize them,  cloud backups automatically, free sync software, secure, over 500 points of tilt on the pen, feels like paper, it's an ebook reader, PDF viewer, is excellent for sketching and drawing, utilize layers....and has zero email, zero messaging, zero web. It is locked down. No distractions. Just me, my notes and my coffee. It's incredibly powerful for what it is. Also, a key piece is that the marker does NOT take batteries! No need to charge it ever. Oh, and the device will not pick up your hands at all. No accidental strokes or identification of your palm as a pen...ever.

You might be saying, "Robert, this is cool, but that thing is expensive af." And I would say, "Yes, yes it is." But, I can honestly say, for me, it was worth it. The device itself was a kickstarter from a few years ago. So they are a start up-company located in Oslo, Norway. They don't have the luxury of being cheap. Everything ships from China as 3 Business day shipping. I did run into a snafu. Before DHL would deliver my package, I was required to pay Duty Tax/VAT in the amount of $140.44. At first I thought this was a scam. But no, it wasn't. I ended up paying it and getting my device, but I also went through the customer service channels for reMarkable (all email) and they made it right by crediting my card $140.44 about two weeks later.

So far, I've written blog posts and utilized the OCR Function. I've kept multiple journals and to-do lists, and I've designed some team logos for different business segments at my place of employment. I even used it in a few job interviews. It's definitely streamlined my workflow. In the future I could see the ability to connect your notebooks to One Note and more. reMarkable has a unique idea. Rather than replacing all the devices out there, they build powerful software updates that really redefine what's possible for the device.

I paid about $800 US total for the device (which comes handsomely packaged with the reMarkable Marker, a quick start guide and a charge cord (standard android cord) Also included in that $800 was a premium leather sleeve ($129) and the Executive Marker ($99). I went all out. But you can get started for $499.

"What about the old fashioned way of taking notes, RJ? What about real journaling?" Look, I still write with a fountain pen in my leather bound journal at home. In it, I have my thoughts on life, struggles and more. I still use my leather wrap I got from the Craftsman's Mark too for much of my writings on philosophy. But when it's work, or notes on productivity etc., its the reMarkable all day. 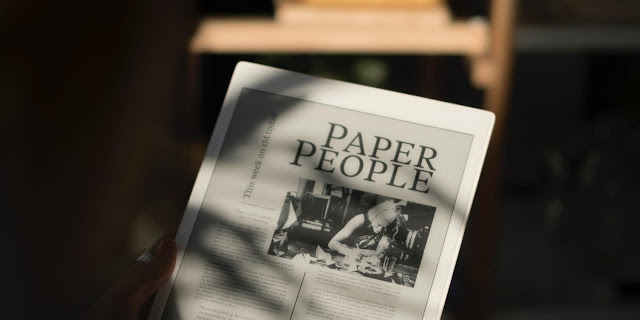 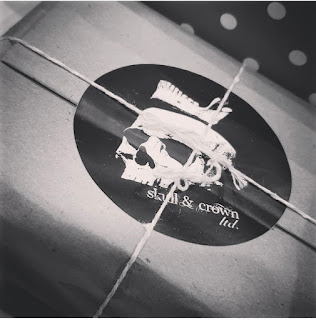 About a year ago I came up with the logo for Skull & Crown ltd. I arranged a skull from my own collection and set the scene for a mini photo shoot. The outcome was what you see on the website. At that time, I didn't know what Skull & Crown ltd. was going to be. Luckily my best friend pointed out an affinity I had for fine secretarial supplies and suggested perhaps this was what I needed to do. Not long after, with no social media presence and only word of mouth we received our first commissioned work--a greeting card for the 2018 holiday season. After creating some designs, I picked my favorite, sent it to the client and went into production.  I hand delivered this order. Not long after, I received one of my own designed cards in the mail as a thank you. I loved designing the card. Making an original design not seen anywhere else. Of course these designs, as any manufacturer or designer will tell you, are not always easy. This particular design was difficult for t